The #MeToo movement, which gained awareness in the fall of 2017, empowered women to speak up about sexual harassment and sexual assault, especially in the workplace and urged companies to take the issue more seriously. However, many believe it has gone too far because companies seeking to minimize the risk of sexual harassment are instead minimizing contact between female employees and senior male executives, depriving women of effective mentorship and decreasing the opportunity for growth and leadership within a company.

Maclean Trainor, a Risk and Financial Advisory Consultant at Deloitte, says he doesn’t necessarily think men are purposefully trying to limit opportunities for younger women but that they are all looking out for themselves so they don’t get any repercussions.

Caroline Rector, an investment analyst at Credit Suisse, said, “The male mentor that I was assigned during my internship only ever got coffee with me before five o’clock, probably because he thought it looked inappropriate since he was about 60 and I was 22. Many of my male colleagues would go out to dinner or get drinks with their mentors and had a completely different experience.”

Trainor believes that this is not a single industry problem but that it is especially significant for women in male-dominated fields.

Bloomberg’s Gillian Tan and Katia Porzecanski interviewed a range of men on Wall Street. According to their report, “many of the men interviewed acknowledged they’re channeling [Mike] Pence, saying how uneasy they are about being alone with female colleagues, particularly youthful or attractive ones, fearful of the rumor mill or of, as one put it, the potential liability.” In the process of adopting controversial strategies for the #MeToo era, men are making life even harder for women.

“The mentoring issue is huge because your mentor is usually the one who propels your career forward and pushes you up the ladder so if you don’t have a strong relationship from the beginning it’s tough to find opportunities,” said Rector.

Even though over 200 prominent men have lost their jobs and were succeeded by women, Fortune 500 companies remain to have a gender imbalance. According to the New York Times, of the Fortune 500 companies, only 24 have female chief executives. Moreover, data from the United Nations shows that while the number of female heads of government has more than doubled since 2000, they still make up just six percent.

“I think that promoting a mentorship program is something that is very important in establishing a proper professional environment that all employees can thrive in. I believe that could be a solution to this problem,” said Trainor.

The otter sighting in Virginia Tech’s Duck Pond has generated a large social media reaction from students and faculty. After Virginia Tech released pictures of the animal on the university’s Twitter and official Instagram page, everyone is wondering how and why the otter got in the pond.

According to the Virginia Department of Game and Inland Fisheries, in 1978 otters were listed as state endangered because “the clearing of stream banks, pollution, and overharvest virtually extirpated them from the western portion of the state.” However, in 1990 the animal was removed from the list due to improvement of stream habitats and efforts to supplement the natural migration of otters back to western Virginia.

Otters rarely appear in the Duck Pond and are more common in the New River. According to The Virginia Living Museum, “River otters inhabit a variety of habitats along rivers, lakes, streams, marshes, and coastal shorelines. This makes the campus landmark a natural habitat for the animal.

Wildlife Conservation student Taina McLeod says, “the Duck Pond is attached to a larger river system and there’s a good chance he just wandered in knowing there’s fish and other food.”

Appalachian Wildlife Management owner, Rudi Woykowski, says the otter most likely won’t stay long because of the lack of mates and because it will deplete its food resources.

While many are excited for the arrival of a new animal in the Duck Pond, Woykowski suggests that it might cause conflict between humans and wildlife. He says, “negative impacts with the otter are going to be a human fisherman getting injured or the otter getting hit by a car because of the proximity to the road.”

Moreover, the otter will impact the Duck Pond’s ecosystem because the animal will be at the top of the food chain.

McLeod says people walking around the Duck Pond probably won’t scare the otter away but bringing dogs to the pond might.

Woykowski warns not to feed or interact with otter because even though they are intelligent and playful creatures, they can quickly turn aggressive.

The popularity of the site is an example of how the rise of the internet and the development of user-oriented social media type platforms has transformed the way that people all over the world receive the news.

The store is owned by Virginia Tech senior Kyle Tan and sophomore Brad Kesling after the previous owner, Carter Davis, passed it down to them. The students market VT Thrift solely through Facebook and Instagram by posting pictures of the clothes for followers to peruse. They have generated a huge following, growing from 250 to 3000 followers in just one semester. Both Tan and Kesling are business majors and credit their knowledge to their professors, however they have not received any direct help or mentorship.

While Tan is graduating in May 2019, he hopes to pass the business down. He says, “the dream is to have a brick and mortar store in downtown Blacksburg to provide jobs for Hokies and give back to the Virginia Tech community.” Both students say that thrifting started off as hobby but could turn into a career path.

Although there are other discount clothing stores in Blacksburg, the students don’t see them as competitors. Tan says, “It’s not really a competition it’s more like a community because we help each other grow.” Students from other universities who also run thrift stores have reached out to VT Thrift for advice.

Tan and Kesling obtain the clothes from thrift stores all across the mid-Atlantic. They go to thrift stores every time they travel but are hoping to find direct suppliers soon. According to Kesling, Virginia Tech students have a wide range of fashion. He says, “what makes us unique is that we serve that wide range of audience.” He also says their most popular items are windbreakers and anything Virginia Tech related.

Thrift shopping is an increasingly popular trend. According to The Association of Resale Professionals, over 25,000 thrift store businesses in the United States.

Students can pick up the clothes directly from Tan and Kesling’s apartment or pay a small fee for a hand delivery. They also offer domestic and international shipping and have sent clothes as far as Australia. 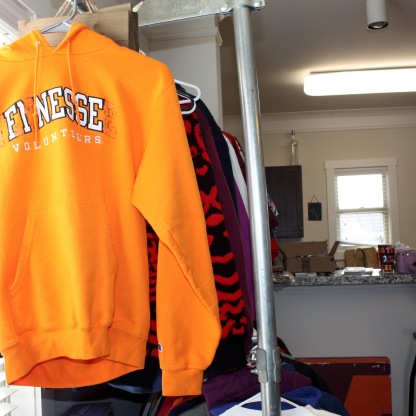 Blacksburg, Va. February 18 – Physical Store: Tan and Kesling run the store from their own apartment in Blacksburg. Photo: Maria Berkowitz 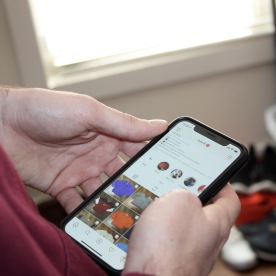 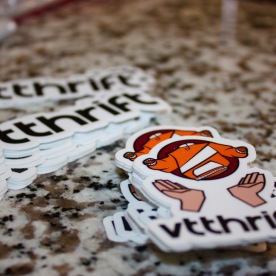 Blacksburg, Va. February 18 – Stickers: They hand out free VT Thrift stickers for laptops and phones as a way of marketing themselves on campus. Photo: Maria Berkowitz 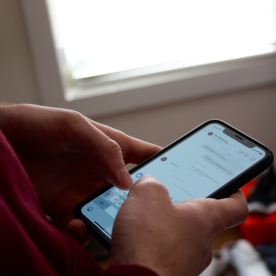 Blacksburg, Va. February 18 – Messaging Customers: Kesling responds to a customer who inquiries about a sweater. He says they have formed relationships with many of the customers and will alert them when they find new items they think the customer would like. Photo: Maria Berkowitz

Blacksburg, Va. February 18 – Instagram Aesthetic: Tan takes a picture of a Virginia Tech windbreaker to put up on the Instagram page. He says he takes the pictures the same way with the same lighting every time to make sure the page looks clean. Photo: Maria Berkowitz