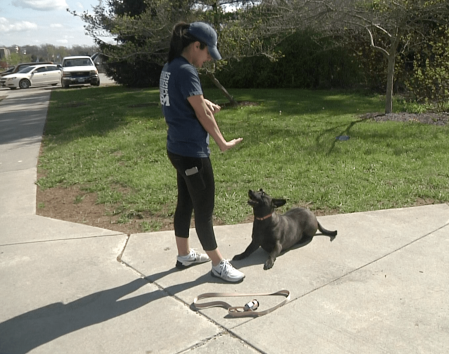 Pros and cons, checks and balances, benefits and disadvantages; there are two sides to the story of owning a pet while in college.

While some students simply adopt a pet just to have one, other students have different motivations.

“Honestly, I was dealing with some depression and stuff like that,” said Carlie, a college student. “There’s a lot of studies about how dogs can help with mental health and I’ve had dogs back home, so I know they do. So I decided to look for one to adopt.”

While Carlie does not have her dog registered as an emotional support animal, many college campuses are beginning to experience a steep rise in applications to have animals as support mechanisms.

According to the Official US Service Animal & Support Animal Registry, an emotional support animal is an animal that helps students cope with diagnoses of anxiety, depression, post-traumatic stress disorder (PTSD) or other emotional disorders.

At Ithaca College in New York, ESA’s jumped from 4 in 2012 to 43 in 2016, a trend that is also showing across campuses nationwide.

For Carlie, she can feel the benefits of having her dog with her in her apartment.

“For one thing, I feel like having a dog to take care of motivates me to get out of the house,” Carlie said. “Taking her for walks, I’m exercising every day because I’m going outside with her. If I’m feeling down, she always brightens up my day.”

The rise in animals on campus stems largely from a 2011 court decision. United States v. University of Nebraska at Kearney determined whether a university, as a provider of housing for its students, must comply with the standards set out in the Fair Housing Act.

Fellow Virginia Tech student Aubrey Stephenson and her friends have a “dog pack” — a group of friends who own dogs — and use their dogs as a way to get out and stay active.

“We have a bunch of friends in a group chat,” said Stephenson. “We all go out every day and let them run around and play for about an hour.”

Stephenson understood the rigors of pet ownership in college and did “hours and hours” of research before adopting.

“Always do your research. Make sure you want a dog. If you’ve never had one before, maybe take care of a friends’ or volunteer at the animal shelter first,” Stephenson said. “My dog is really high energy. He loves playing so he needs a lot of activity or he might eat my couch.”

Comments Off on Dog ownership a risky proposition among college students