For years, Progress Festival has occurred during the Virginia Tech spring semester. This year the festival will take place on May 18-20, after final exams and graduation. This schedule change could result in a smaller share of the student population attending the festival, which has roots in the student community.

There are many reasons why the festival was pushed back this year. The weather played a huge role in the scheduling change, as torrential downpours dampened last year’s festival. As Progress Festival founder and organizer John Clockwood describes, “April is right in monsoon season, and I don’t think anyone going to Progress Fest can stomach five more inches of rain.”

Food supplies also factor into the schedule shift. Clockwood envisions the festival as a place where you can get everything, including sustenance. According to him, moving the festival back further into harvest season means the festival can rely on locally sourced organic foods.

Additionally, Clockwood believes turnout would be hurt by the crowded Spring Semester this year. He says that the festival would have to contend with the Virginia Tech Spring Football Game, Radford University final exams, and Virginia Tech final exams.

The schedule change could have negative ramifications for the festival, though, as students have comprised a large portion of the audience and they may not stick around once the semester ends. Clockwood has faith that students will return for the festival, saying, “I think that people would come back because people really care about the festival, and I have seen in previous years people always come back; they graduate and move on and they drive six, seven, eight, even ten hours to come back and see everyone that they know.” As for current students, he says, “this just means they get to see their friends two weeks after they left.”

Sine Wave Surfers Festival will now take place April 20, the weekend normally reserved for Progress Festival. Its founder Adam Wirdzek, who will also perform at Progress Festival as Electrobro, described the concern of students balancing Progress Festival with upcoming final exams, saying, “It takes a lot of the pressure off of a lot of our demographic, students, from worrying about doing a full-blown music festival right near finals.” Wirdzek is not concerned about his festival, however, saying, “It’s just one day, so you don’t have to survive a whole festival.”

Blacksburg, Va., Feb. 2, 2018 – Old Show Posters: John Clockwood has been organizing music shows in the Blacksburg community since 2011. Many of his spring shows are used to promote and fundraise for the festival. Photo Credit: Brendan Quinn 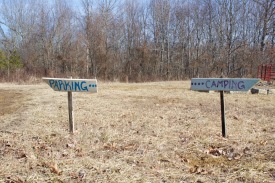 Dublin, Va., Feb. 2, 2018 – Camping and Parking: Many of the progress festival signs and decorations remain in place on the farm throughout the year. Photo Credit: Brendan Quinn 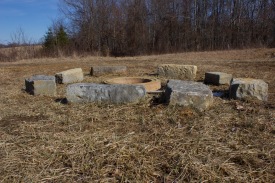 Dublin, Va., Feb. 2, 2018 – Camping Circle: Attendees are encouraged to camp overnight if they stay past nightfall. Some festivalgoers may be intoxicated, and organizers want to avoid any driving under the influence. Photo Credit: Brendan Quinn

Dublin, Va., Feb. 2, 2018 – Shed/Sauna: Every part of the farm is repurposed for the festival; a secluded shed becomes a sauna during the weekend of the festival. Photo Credit: Brendan Quinn

Dublin, Va., Feb. 2, 2018 – Stage Area: A canopy looms over the stage area. This protection is essential if weather is a concern. Photo Credit: Brendan Quinn 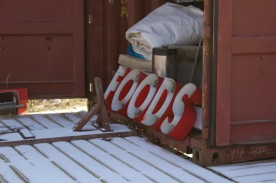 Dublin, Va., Feb. 2, 2018 – All attendees are required to pick up after themselves. Festivals only continue to occur as long as everyone respects the environment. Photo Credit: Brendan Quinn