District of Columbia, March 24 – FIGHT FOR CHANGE: Colleen Cassidy listens to a student speaker on stage. “I almost feel like a fraud. When I say a shooting happened here, I feel tied to it even though I wasn’t there. It’s like you didn’t have to go through it, and you still feel responsibility and that’s what being a Hokie is all about at the end of the day,” Cassidy said. Photo: Ricky Lam.

Two Hokies holding paper signs marched with hundreds of people on Pennsylvania Avenue, demanding a better future for the children of America.

“It was very powerful,” said Chyna Murphy, a sophomore at Virginia Tech. “Just feeling that many people there and looking to your left and seeing people crying and everyone’s so emotional from everything. That was definitely amazing.”

“March for Our Lives” occurred on March 24th, 2018 in the District of Columbia with 800 sibling events throughout the nation and across the world. Two months after the Parkland shootings, the protest was organized by students for more gun control legislation.

“I feel like our generation especially is so desensitized to hearing about massive shootings now because they happen all the time. Seeing someone who’s experienced it and hearing their story just makes you want to take action that much more,” said Colleen Cassidy, a junior at Virginia Tech.

With constant news reports on gun shootings in schools, many people from those afflicted areas showed up, including Hokies like Cassidy and Murphy who traveled four hours up to the nation’s capital. The Virginia Tech representation and student speeches were the highlights of both of their days.

“As a Hokie, I really went out to show my support for stopping gun violence and I kind of felt at home,” Murphy said. “To know that so many people were feeling the same way that I feel about the topic and just being able to hear the speeches of so many people that were 18 and under.”

According to Vox, the rallies gathered at least 1.2 million people across the nation with the D.C. march accumulating anywhere between 200,000 to 800,000 people. USA Today estimates that the march is one of the largest single-day protests in D.C.

Cassidy believes that participating in the march could spark better change and end the number of fatalities across the nation.

“You still have the presence kind of lingering on campus and when you talk about it in classes or you pass the memorial, you just realize that it happened here. You want to take responsibility for what happened and have other Hokies’ backs,” Cassidy said. 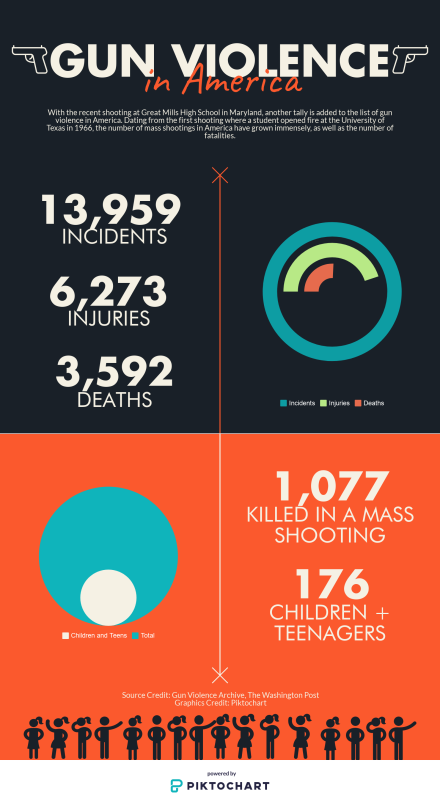 Click the image to see the full version of the infographic.