Seventeen Virginia state legislators requested federal assistance to improve Interstate 81 on Thursday, Jan. 25. According to Virginia Business magazine, the legislators sent a letter to U.S. Senators Tim Kaine and Mark Warner to address the “dire need of improvements to increase safety” in the Shenandoah Valley.

“The letter… asks that the congressional delegation works with President Trump to address longstanding transportation and safety needs,” Del. Christopher Head (R – 17th District) said. “In Richmond, we will continue to debate and negotiate our budget and transportation spending.”

Head and Del. Chris Hurst (D – 12th District) are two of the 17 legislators who signed the letter to Virginia’s congressional delegation.

According to WSLS.com and WDBJ7.com, Hurst held a town hall in Blacksburg on Saturday, Jan. 27 to give citizens an update from Richmond. He discussed traffic congestion, driver habits and the need to change the transportation narrative from “being solely focused on northern Virginia.”

“Transportation needs… and policy discussions shouldn’t begin and end with Interstate 66 and the Beltway,” Hurst said. “We want attention to be first placed on Interstate 81.”

In addition to the legislators’ letter to the congressional delegation, the Senate of Virginia has introduced two bills that seek to improve Interstate 81. According to Virginia’s Legislative Information System, Senate Bill No. 561 aims to impose left-lane restrictions on tractor trucks, while Senate Bill No. 971 establishes a corridor improvement plan.

“Currently, we are working with different VDOT administrative districts to identify specific projects on Interstate 81,” Head said. “I’m hoping that included in those projects, are plans to widen to three lanes in certain areas of the Roanoke Valley along I-81 to relieve congestion and address safety concerns.”

Regarding plans to improve public safety on the interstate, Head and Hurst stressed the importance of research.

“I think we need to study this issue more in-depth than ever studied before,” Hurst said. “It’s great that Virginia Tech has the transportation institute, so I think we should definitely be working with them.”

Hurst is referring to the Virginia Tech Transportation Institute (VTTI), a research organization that seeks to “save lives, time and money” in transportation. VTTI is home to the I-81 Corridor Coalition, an association dedicated to improving public safety along Interstate 81.

“We see ourselves as, eventually, becoming the best resource for information on the corridor,” Andy Alden said.

Alden is the I-81 Corridor Coalition’s executive director. He gave his thoughts on how transportation in Virginia can be improved.

“We definitely need a new funding structure,” Alden said. “We need a new way to fund the improvements that are needed.”

Alden claims that VTTI does not get too involved in the “policy side of things” regarding legislation. Instead, the organization seeks to inform lawmakers with research reports. 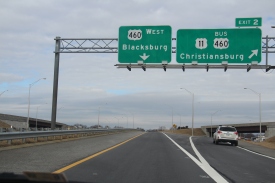 BLACKSBURG, V.a., Feb. 6 – Many Virginia Tech students and faculty take Interstate 81 to get to and from their hometown. Photo: Cody Davis

BLACKSBURG, V.a., Feb. 6 – Exits such as this one are subject to traffic congestion and accidents. Senate Bill No. 971 aims to reduce said accidents with its proposed corridor improvement plan. Photo: Cody Davis

BLACKSBURG, V.a., Feb. 6 – Under Senate Bill No. 561, tractor trucks such as this one would be mandated to travel in the right-hand lane in designated areas. Photo: Cody Davis 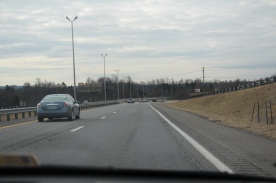 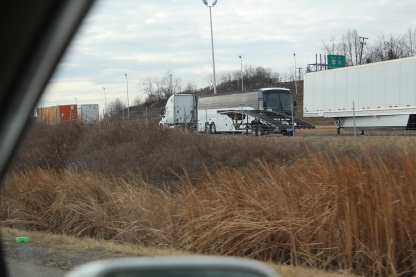 BLACKSBURG, V.a., Feb. 6 – The I-81 Corridor Coalition focuses on specific causes of traffic accidents, such as the small number of truck stops along the interstate. 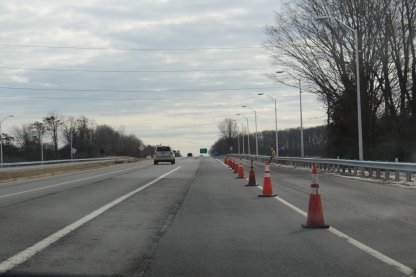