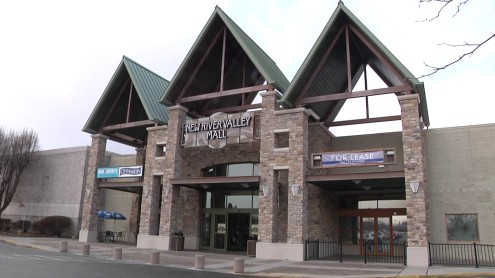 CHRISTIANSBURG, Va., Dec. 12, 2017 – NRV Mall: The New River Valley Mall, a shopping center filled with places to eat and retail stores, has been forced to close down several stores due to poor performance within the last few years. Photo: Chase Parker

The New River Valley Mall, located in Christiansburg, Va., has been struggling to bring in customers for years now. As a result, many of the mall’s signature stores have been forced to close up shop.

GAP, Tailgaters United, PacSun, Rue 21 and most recently JC Penny, are among the casualties of retail stores that have been forced to shut down their locations in the mall.

“JC Penny closing down was just a corporate thing,” explained Tina Corder, the Specialty Leasing Manager for the mall. “They closed several of their underperforming stores, so that was one of their choices. But it’s not really a bad thing for us. It was a store that was under-performing.”

The other stores have closed down for the same reason. For example, earlier this year Rue21 announced that they’d be closing 400 stores. Due to the New River Valley Mall’s struggles, the one located there was an easy target to shut down for the retailer.

Despite several big-name stores closing down, the mall’s management team says that it is already brainstorming ways to replace them and that there are several things currently in the works that will enhance the overall customer experience.

But for now, the slow mall traffic combined with the alarming rate of stores that have closed down has given mall management the task of finding ways to bring in more customers.

“‘Touch a Truck’ is one of our great events. We work with a lot of non-profits through the year to bring in things like that, and that’s such a great one because it’s a community event and it’s free,” Corder said. “We also have our Fall Festival in October that we work with the Christiansburg Police Department on. They’ve been doing that for 17 years now. So that’s just two of the free events that we hold to try and bring more traffic here to the mall.”

Another factor that benefits the mall is something that they have no control over the holiday season. According to Statista.com, retail sales during the holidays can account for as much as 30 percent of a retailer’s annual sales. The stores in the New River Valley mall are no exception.

“Christmas time is very important,” Corder said. “Most of the store’s sales are from the holiday season so they put a major focus on advertising for that.”

Come Dec. 26, however, Christmas time will be over and the management team’s plan to bring in more revenue to the mall will be put to the test.

Comments Off on NRV Mall hopes for a brighter future