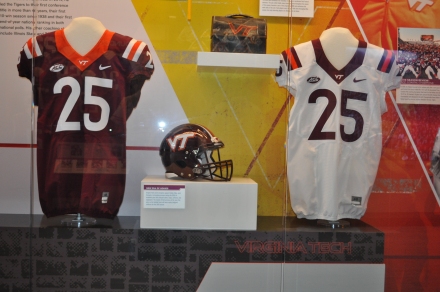 Blacksburg, Va., Nov. 9—25’s On Display. In the second year of the Beamer jersey tradition, the Merryman Athletic Facility puts Beamer’s number on the new Nike jersey designs. The exhibit shows both the 2017 home and away uniforms. Photo: Drew Davis.

When head football coach Frank Beamer retired in 2015, Virginia Tech had to brace for change—change it had not had combatted for over 29 years. Yet out of this adjustment, under new head coach Justin Fuente, came a new tradition that kept a bit of the past.

The former Memphis football leader decided to reward a player each week with the retired No. 25 Beamer jersey to wear for excellent special teams play.

Now almost two seasons in, the tradition is still alive and well, and Blacksburg has seen a variety of players sporting the 25.

There’s been the fast.

Greg Stroman arguably had the greatest performance donning the two numbers, as the Richmond Times-Dispatch recaps.

For the homecoming game in 2016, the cornerback/return man scored on an 87-yard punt return touchdown and notched 155 All-Purpose yards against North Carolina.

There’s been the big.

Hokiesports broke the news, as the three hundred pound defensive tackle would go on to have four tackles, three solo, one tackle for loss, and one pass batted down in a win against Duke.

There’ve been the freshmen.

True freshmen wide receiver Divine Deablo and Australian-born punter Oscar Bradburn in 2016 and 2017 respectively wore the 25, as the newcomers too joined the newer tradition.

Of note, Deablo forced a fumble and the Bradburn had a 53-yard punt, both in victories.

Overall, Fuente says, “Thanks to Coach Beamer, his assistants and many talented student-athletes, Virginia Tech has become synonymous with special teams success.”

Now with Beamer gone, he remains with the team through the tradition and the special teams continue to succeed with great plays like Stroman’s and Deablo’s in the 25.

Beamer thinks this gesture shows the Hokies continue to be good hands.

“I couldn’t be more appreciative of the way Coach Fuente and everyone at [Virginia] Tech has handled the coaching transition. I think we have a great head coach who is going to continue to make Virginia Tech even better.”

Blacksburg, Va., Nov. 9—Laid Out. Beamer’s number has been on four different jersey designs in 2017. The patterns include the 2017 home, away, Hokie stone and homecoming orange. Photo: Drew Davis.

Blacksburg, Va., Nov. 9—Best So Far. Cornerback/punt returner Greg Stroman had the greatest game under the new Beamer Jersey Tradition. Rocking the No. 25, Stroman returned an 87-yard punt for a touchdown and totaled 155 All-Purpose yards against North Carolina on October 8, 2016. Photo: Drew Davis.

Blacksburg, Va., Nov. 9—125 Year Anniversary. VT Football jerseys have the path celebrating 125 years of the program. Beamer has currently been with the program for 34 years: three as a player, 29 as a coach and 2 as a special assistant to the Athletic Director. Photo: Drew Davis.

Blacksburg, Va., Nov. 9—Four Of A Kind. Beamer’s No. 25 has been on four different designs in 2017. The patterns include the 2017 home, away, Hokie stone and homecoming orange. Photo: Drew Davis.

Blacksburg, Va., Nov. 9—VT. The jersey shows the letters representing the school on the collar. The VT is on every jersey like there is now a No. 25 every game. Photo: Drew Davis.

Blacksburg, Va., Nov. 9—First Of Tradition. The maroon design was the first jersey to sport the 25 as apart of this new tradition. The jersey was worn against Liberty September 3, 2016. Photo: Drew Davis.