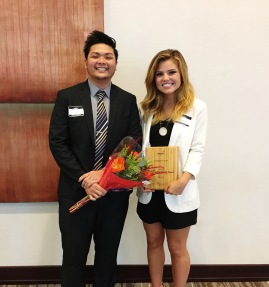 Virginia Tech’s commitment to research and aid throughout the water crisis in Flint, Michigan, brought national attention to the university and its research team. With civil engineering professor Dr. Marc Edwards at the helm, the Flint study team is expanding its reach to areas affected by recent natural disasters.

In the last two months, the United States has seen Hurricane Harvey rip through Texas, Hurricane Irma ravage Florida, and Hurricane Maria topple much of Puerto Rico. In fact, according to CNN, Puerto Ricans have resorted to knowingly consuming potentially dangerous water in the storm’s aftermath.

But the Hokie team, which helped to blow the whistle on hazardous levels of lead in Flint’s tap water, is now taking samples from wells in Houston and parts of Florida. Already, samples from Houston wells have tested positive for E. coli, as well as fecal indicator bacteria.

“The immediate reaction is to send tons of bottled water so people don’t have to deal with this,” said Sophia Lee, one of the undergraduates on the research team. “At the end of the day, we need a solution.”

The E. coli and other bacteria infiltrating Texas drinking water is a direct result of flooding and runoff, and likely damage and breaking of pipes and wells. According to Texas A&M University, Virginia Tech’s partner in the Hurricane Harvey research, more than one million Texas cattle have died as a result of affected water. While humans have not been affected to the same degree, the chemical change in the water is significant.

In addition to working with Texas A&M, the research team has also partnered with the University of Florida to gather and analyze water samples. Members also still make frequent trips to Flint, which, according to Dr. Edwards, is improving.

“It is difficult to be working on so many places at one time,” said Hisyam Mohsin, another of the undergraduate researchers. Mohsin and Lee received the Community Engagement Award at the University Professional and Continuing Education Association (UPCEA) conference this month.

As was true for residents of Flint, residents of the hurricane-affected areas in Texas and Florida have received national support and resources. Tech’s research team will require another grant to work on Puerto Rico, however. According to Lee and Mohsin, the desire to help is no weaker for the US territory.

UPDATE: As of Tuesday, October 24, the Research Team will start testing samples from Puerto Rico. More details to come.

Click the photo to view the full infographic on Infogram.com